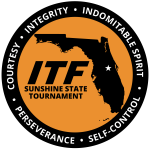 Sunshine States ITF Tournament may run two type of events: Opened or Sanctioned. Both rules are the same except the opened tournament is more flexible in the judging and dress code. Because the different Federations, Associations and the Independent Dojangs, the practitioners will perform the Chang-Hon Patterns with some variations from one another. We want to make sure the event is fair and a great experience for everyone.

The tournament will be accordingly to the International TaeKwon-Do Federation rules but adjusted to opened tournament. Sunshine State ITF will try to give the competitor more opportunities to compete, this is why we will use different competition models. The tournament will be Single Elimination with 3rd place if you reach the Semi-Finals for all Patterns Categories and Divisions; a combination of Single with 3rd Place, Repechage or Round Robin Elimination for Sparring Categories depending on the amount of competitors per Division. The Sparring will be a Continuous Sparring for all Categories and Divisions.

Only registered coaches will be allowed on the competition floor. Coaches can be Master, Instructor, Assistant Instructor or a Registered Black Belt. Coaches are required to upload a picture (only Headshot) to their profile.

Geographically Balanced - We will keep competitors from the same School, City or Country on different sides of the draw (when possible.)

A Dobok (any color) with a Belt representing their rank should be worn at all times. Students with only t-shirts will not be allowed to compete. A t-shirt under the dobok is required for female competitors and optional for male competitors.

A Form Scoreboard System will be used for judging.

All competitors must have the following mandatory gear to compete in the Sparring Division:

A Dobok (ITF Approved) with a Belt representing their rank should be worn at all time. Students with only t-shirts will not be allowed to compete. A t-shirt or competition braw under the dobok is required for female competitors.

An ITF Scoreboard System will be used for judging. Please refer to ITF Umpire Rules.

All competitors must have ITF Approved Gear to compete in the Sparring Division:

This is a professional tournament and rules should be followed at all times.

In competition a technique is valid according to a light contact system if:

One point will be deducted for the following offences:

* To include any action taken a competitor that shows disrespect, lack of following directions or other unacceptable behaviors towards umpires, officials, or other competitors, including though not limited to: Failure or refusal to follow referee’s directions, intentionally leaving ring/manipulation of time, inappropriate behavior/language.

Warnings will be assigned for the following offences:

The sum of three (3) warnings automatically results in the deduction of one (1) point.

A competitor, coach, parent or guest (related to the competitor) that insults an opponent, coach or official will be disqualified from the rest of the competition.

A competitor that is negatively responsible for causing a loss of consciousness or causing a concussion in sparring competition may be disqualified. The unconscious or concussed competitor shall not be able to compete again during the whole event, and as such will forfeit any remaining matches or events.